skip to main | skip to sidebar

Pepper and Sedona's school has a fishing trip for them once a year. 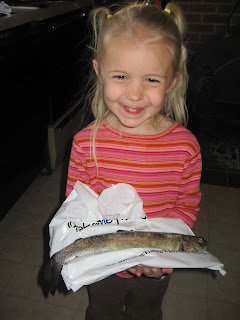 I love the proud & excited look on her face in each of these pictures!
SO CUTE!

A private land owner stocks his river/pond area with trout and then has the Department of Wildlife is invited to take the Headstart kids to that pond and fish for the day.

After which they give the kids all free fishing poles---pretty amazing if you ask me.

I normally go, but Lucas was awesome enough to volunteer to take both girls, and I got the house picked up. Yeah Lucas! 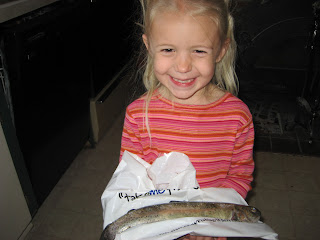 as told by Pepper Larson.

"In the first five minutes then I catched the fish and then dad helped me and he said 'what the heck'. So we put a stick in his mouth and put in back in the water so he could be fresh and yummy. Then I said 'I don't think I can catch anymore' and then dad said 'when you are done fihsing come over here' and then dad carried it to the man and I saw his eyeballs. and then the fish was moving his tail in the water, and then he stopped and I think he was asleep and then we ate it and then it was all gone. We don't eat the little white string things (bones) in there" 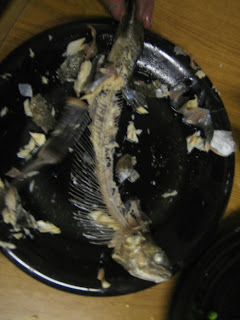 SO if you need a little translating.


Lucas, Sedona, and Pepper all got to the stop and set up. Lucas got Pepper set up first and while helping Sedona he heard Pepper's little voice "Umm..dad...I think I got a fish." He looked up and suprise, she had caught a fish! First Sedona helped reel in for a minute, but then dad took over. It was a pretty rainbow trout. It had swallowed the fly so Lucas had to use his pocketknife and pull it out. He put a stick through the gils and placed it in the water to keep it fresh. When they took the fish to the Wildlife department man--he said "wow, this one must have been in since last year." It was a good sized fish. They wrapped it in a plastic bag and brought it home. We cooked it for dinner and the girls ate almost the whole thing, being very careful to look for bones. Quite the adventure for a little 3 year old! 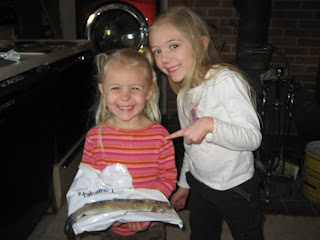 This one is really cute Amy!
I still get excited when I catch a fish so I bet she was so happy.

Lucky Larson's
We are a happy family!